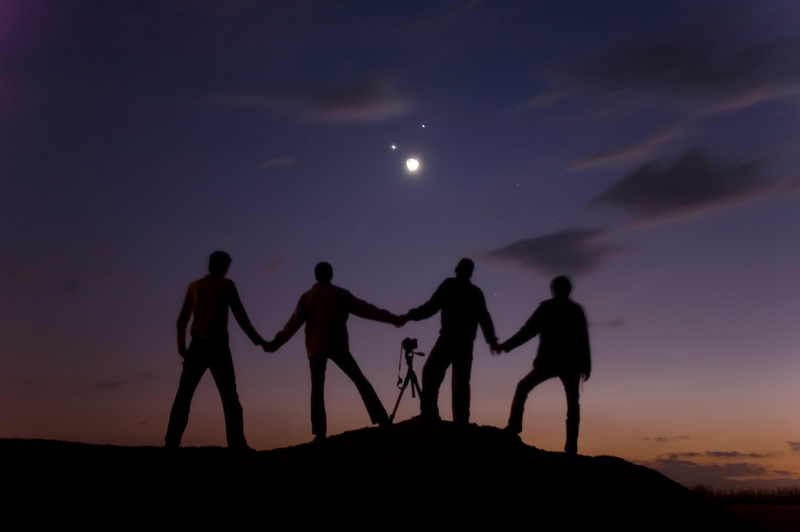 When Planets and People Align

We are in a season in which social distance is not only recommended, but for many, a requirement. We have spent most of the last year physically distanced from our students, our colleagues, our friends, and even from much of our family. However, this is 2020, and it seems that anything is possible – the sky is the limit, so to speak – and it is exactly in the sky where, through the month of December, we will see two rebel planets appearing to defy their own social distance norm. Yes, although Saturn and Jupiter began appearing closer to each other this past summer, beginning mid-December, the proximity of these two rebel planets will greatly narrow and cause a spectacle you don’t want to miss.

On December 21st, these two giant planets will appear just a tenth of a degree apart, which NASA describes as “about the thickness of a dime held at arm’s length”! NASA goes on to explain that the two planets and their moons will be visible in the same field of view through binoculars or a small telescope.

Saturn and Jupiter are actually separated by more than 400 million miles, but in the night sky, they will appear closer than what has been seen in centuries. They will appear to touch and form one large, bright and brilliant star in the sky. This alignment is known to astronomers as a “great conjunction”.

Astronomers tell us that the last time Jupiter and Saturn were this close to each other was in July 1623. A conjunction also took place in 2000, but it was hard to recognize. A closer alignment between these two planets hasn’t been seen since March 4, 1226.

Interestingly, some are saying a holiday connection is also at work. Some astronomers have postulated that in Christianity, the Star of Bethlehem, said to have guided three wise men to the birth of Jesus Christ, was a conjunction like the one set to appear later this month — although no one can say which planets may have been involved.

In true 2020 fashion, isn’t it curious that we will see this historically close alignment of two planets, creating the appearance of the most brilliantly illuminated star seen in centuries? And, it is all happening on December 21st, which is the winter solstice, also known as the darkest day of the year!

Maybe this cosmic event is merely a celestial coincidence, but after all the world has experienced this year, it serves as a great reminder that light does overcome darkness and hope dispels discouragement. And like these two planets, our Hershey community aligns its light of hope for humanity and a better future to illuminate encouragement and inspiration to others.

I am ever so grateful for the light that shines through our Hershey staff, students, and families. May we all continue to shine brightly throughout this holiday season and beyond!

Note to fellow stargazers: the best viewing is said to take place in the southwestern sky 45 minutes after sunset on December 21st.